Prior to European settlement, the area that is now known as Waterloo is believed to have been the traditional home of the Cadigal/Gamaygal, collectively known as the Eora Aboriginal people. The area was largely composed of sand dunes covered with Banksia scrub with a plentiful supply of groundwater running through the area.

With the establishment of European settlement in Sydney Cove, the large volumes of water trapped by the ponds and swamps saw the area initially utilised by industries such as milling, wool-washing, fell-mongering and tanning. Two larger bodies of water, known as the Great Waterloo Dam and the Little Waterloo Dam, were formed in the area of land that would later become the suburbs of Waterloo and Zetland. During this time part of what is now Powell Street was a watercourse that flowed into the Little Waterloo Dam. 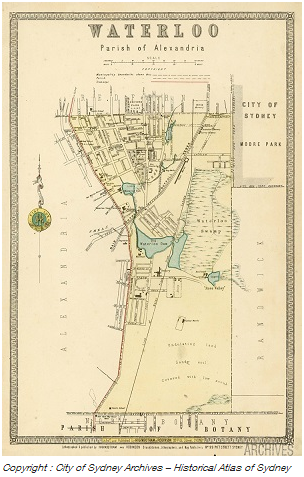 The land on which the Mondrian Apartments are now built formed part of the Mt Lachlan Estate, which was one of the first European grants in the district encompassing 185 acres. The estate was granted to John Thomas Campbell on 30th June 1825 and was then sold to Daniel Cooper and William Hutchinson in 1829, remaining in the hands of the Cooper family until the twentieth century. The area remained largely undeveloped for many years. However, in 1887 the Waterloo-Botany area ceased to be the source of water for Sydney and subsequently in 1894 Sheas Creek was made into what is now the Alexandria Canal. These two events resulted in levelling and drainage of the area and the establishment of a more substantial road system.

At the beginning of the twentieth century, parts of the estate were leased and a row of twelve weatherboard cottages were established along the Bourke Street frontage. A night-soil lane (Aras Lane) was formed along the back of the properties. The land between Elizabeth Street, Powell Street and Aras Lane appears to have remained vacant until the second decade of the twentieth century, with the staggered sale of parts of the land over this time. The first block running adjacent to Aras Lane (and extending north across Powell Street) was sold to William McPherson in 1914. McPherson established a stone mason business, Holdsworth McPherson and Co. and utilized the site for the storage and manufacture of marble goods. Luke Muras later purchased the adjoining block to the east in 1915 and built a light-weight steel structure to house his engineering and blacksmith business (parts of this steel structure are still retained along the Powell Street entrance to the apartments). A small allotment at the corner of Elizabeth and Powell Streets was purchased by E.A. Sloman, a company that manufactured machinery and used the site as a yard.

The Chubb Company began to establish its new factory in the area in 1920, purchasing the lot occupied by the E.A. Sloman company. The company built a one-storey building for the manufacturing and assembling of security devices on the site. In 1932, the company expanded its premises with the purchase of the Holdsworth McPherson and Co. stone yards, who had gone into liquidation. The Chubb factory prospered during the inter-war years and the Waterloo factory was a site of substantial manufacturing. In 1949 the company acquired the Luke Muras building and the company continued to expand towards Aras Lane. Over the 1960s and 1970s the company purchased the weatherboard cottages along the Bourke Street frontage and these were demolished in anticipation of developing a further factory building, but restrictions were placed in this development application by Council and the land used as a car park.

The Chubb Company later vacated the site in 1998 and the buildings stood vacant until the development and construction of the Mondrian Apartments and the adjacent Taylors College building. Aras Lane remains as a landscaped area between the two properties. 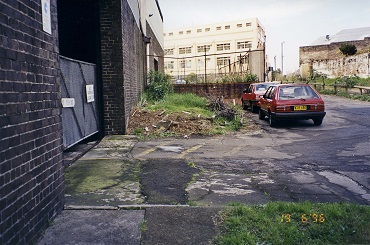